Inappropriate behaviour, bullying and sexual harassment in the workplace

“Hands off!” – Sexual assault in the performing arts

SzeneSchweiz takes action as a consequence of an alarming survey

Measures to protect artists – on, in front of and behind the stage and the camera.

These anonymized cases show the picture that emerged in the survey on sexual harassment in the performing arts. While in the USA the #MeToo wave caused sustainable changes in the minds and – even more – regarding the protection of the artists, things still look bad in many places in Switzerland. 79 percent of the survey participants had experienced sexual assault in the past 24 months, across all age groups and genders. A total of 577 incidents were mentioned, 400 of them in women and 177 in men.

The detailed evaluation of the survey looks like this: (in German only) 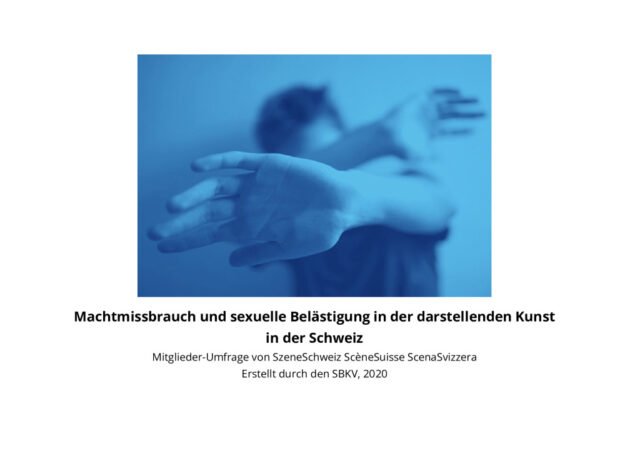 SzeneSchweiz has planned various measures to counter the abuses.

One of the most important tools is an anonymous reporting platform that enables those affected to report incidents, institutions, people and productions. SzeneSchweiz will then clarify these allegations.

Click here to get to the anonymous reporting platform.

Code of Conduct – Policies for inappropriate behaviour, bullying and sexual harassment in the workplace

SzeneSchweiz has a fund for emergency support of its members. Grants from this fund are one-time grants and should only be used when public social assistance or other possible foundations fail to give aid. There is no legal entitlement to support.

You can find us here.